DAVID, GOLIATH AND LEXI THE CAT

Everyone knows the story, right? Shepherd David, the underdog, takes on the well-armored Goliath to settle an endless war, and fells the Philistine giant with a stone from the sling he uses to protect his flock. A story to hearten any young startup company that wants to tackle Microsoft or Apple. But now it seems Goliath may have been the near-sighted underdog suffering from pituitary malfunction, and David was using state-of-the-art artillery which could fire as accurately and with as much power as a modern 45.  For the new take on this ancient story, check out Malcolm Gladwell’s recently-released book.

I bring this up because here’s a David and Goliath story of my own. Or at least of one of our cats. You must know by now that I’m fascinated by animal behavior, domestic and wild. So it will be no surprise to learn my wife and I care for a number of cats, mostly abandoned felines. Some have sweet dispositions but also health issues making re-homing difficult, others are full of affection but too old for adoption or can’t be separated from long-time companions, that sort of thing. And then there’s Lexi, whose distinctive personality either wins you over or leaves you wondering why you didn’t get a dog instead.

Note how she grooms herself before the mirror. Cat vanity. And the truth is, she’s a diva in her mind, and a bully when it comes to the other cats, but you can always count on Lexi to entertain. Lately, she’s started hiding in the bushes above the koi pond. She’s actually pretty poor at hiding, since her stark white ruff emerges from the greenery like a ball of snowy fluff, and any creature approaching head-on can spot her in a flash and keep its distance. Nevertheless, she takes advantage of her rocky perch above the pond to observe the fish below and soak up the sun.

Early this morning a tall white crane dropped down clumsily from the sky, intent on finishing off the few goldfish not yet devoured over the course of last year. Once we had a dozen large and healthy butterfly koi inhabiting the pond, but one by one they disappeared down the gullets of these big birds. I finally decided that “fish gotta swim and birds gotta eat,” so let nature take its course. I no longer run out of the house yelling wildly and waving my arms at the first approach of a great blue heron or sparkling white crane.

But no sooner had the crane settled to the rocks then Lexi  became a flash of fur, flying over the rocks and springing high in the air toward the startled  crane. Keep in mind that the crane is about four times larger than Lexi. Here’s the David vs. Goliath moment. The bird flapped up to settle fifteen feet above  on a curving birch trunk, then sat in the sun and looked around in total disdain of the little cat down below.

Now Lexi wasn’t about to let this fly (pun intended), so she did her best to climb the rose trellis and approach the crane. The bird, confident of its perch, spread its wings to the sun, straightened  a few feathers, preened and plucked, basically doing anything to aggravate Lexi, who remained out of pounce-range, tail flicking in frustration.  Meanwhile, Tara the black cat watched to see how this all played out. Since Lexi often picks on her, Tara was ready to let Lexi take the fall.

Once Lexi realized she would never reach the crane, she backed off, feigned disinterest and wandered down the hill, tail hoisted high as she left the pond area. For twenty minutes the crane continued its preening, then flew to our rooftop and waited.

When all appeared safe, the bird flapped down toward the edge of the pond, ready for that postponed breakfast. But just as it hit the ground, out from behind thick foliage flew the determined Lexi in one last desperate lunge for the bird. She had snuck around the pond and lurked under the plantings, biding her time. We were very surprised to see her spring from the surrounding greenery. The crane was equally surprised.

And had had enough. The big bird flapped away through the trees to seek  a more hospitable pond, one ideally lacking a white devil cat. Lexi watched it flee, than parked herself between the  basins and began to groom her coat, fluffing up to her fullest. Vain, yes, the diva, yes, but obviously proud of having done her duty protecting the goldfish. 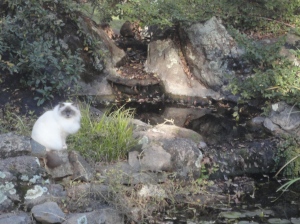 To experience living with a Lexi, visit http://www.simonscat.com and check it out.  And if you wish to contribute to the rescue of cats without a home, please support http://www.fatkittycity.org. That great organization can use all the help you can offer, and your donations are tax-deductible.

4 Responses to DAVID, GOLIATH AND LEXI THE CAT