Writers such as Charles Dickens used to publish their stories and novels in serial form, so readers looked forward to the next installment, and paid for more newspapers and journals.  See what you think…here’s Part One of a short story, then watch for another and the intriguing conclusion in the next two days.  And there’s no charge for these blog posts!

“Give me a break, Laurel…you know how kids are, always imagining things.”

“It’s different, Hunt.  She swears she sees them, all green with pointy ears and noses and short little arms.  They scare her—she’s trembling when she talks about them—but she insists on going back out there, again and again.  It’s beginning to frighten me.”

“Honestly, honey, aliens?  You are still helping her pick out the safe mushrooms, aren’t you?”

“Come on, Hunt, be serious.” She grinned despite her concern.  “Heather is really serious about this, and we at least owe her a look, don’t you think?”

“Maybe it’s that crazy diet of hers.” He turned the venison roast he was tending.  “She hasn’t touched meat for weeks now.  And that nonsense about all the other creatures being her sisters and brothers, not wanting to be a cannibal.  She’s acting crazy enough without seeing little green men everywhere she looks.  Maybe we should have had another kid after all, knowing we planned to finally move this far out in the forest; she gets so damned lonely out here.”  He gave his wife a hug of reassurance.  “Don’t worry, I’ll look into it.  Meanwhile, where is our little leaf-eater?”

“Up on the ridge again.  Scared, but so very stubborn.  Hmm, wonder where that comes from.” She kissed him.  “Says she’s going to prove they’re up there.  Shall I call her home so you can have a talk?  I’m sure it’ll help if you at least hear her out.” He nodded and Laurel went to find their girl.

Hunt turned the thick roast over the charcoals, inhaling the aromatic smoke and savoring with his eyes the evening’s coming dinner.  “Vegetarian!” he grunted in disbelief, then went out to find out what was keeping them.  He strolled onto the deer path that led to the ridge.  His wife’s voice was audible up by the edge of the cliff, calling their eight-year-old in long, extended syllables:  “Hea—therrrr!”

“God, how kids have changed.” Hunt commiserated with himself, weary of the child’s idiosyncrasies, but loving her all the more for that deep streak of misguided compassion.  The crazy attachment to animals must come from Laurel. Gatherers, not hunters, how true is that? 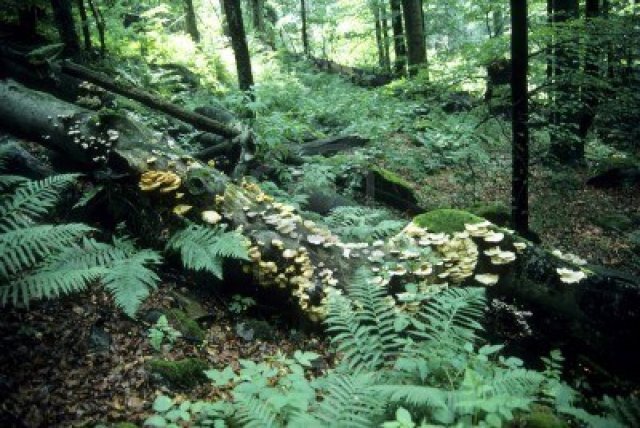 He watched his two dark-haired beauties coming down the path toward him, the concerned mother’s arm cradling the girl’s shoulders.  Pride crept across his sullen features, and he had to admit that, like her father, at least little Heather had no fear of sticking her neck out or standing up for what she felt was right.

“Any luck?” his tease obvious.  “Any more of your little green men?”

Heather glanced sharply up at her mother before accepting the inevitable, then ran forward to meet him. “Daddy, it’s serious, they’re really out there!”

“Okay, then just where do you see them?”

“They just appear when you’re thinking about other things, or watching the animals, or just looking at the sky and the clouds. Mostly up in the long meadow near the ridge.  There’s a movement out of the corner of your eye, and then, if you don’t move suddenly, they just pop up out of nowhere!  It’s scary!”

There was no mistaking the conviction in her voice—she really believed it all.  He stooped down to hug her.

“Daddy,” her voice barely a whisper, “I don’t want to be scared, but they’re…they’re so strange.  I’ve just got to know more about them.”

“Okay, then tell me exactly what they look like and maybe I can help figure this business out.” He threw Laurel a quick glance, and she wasn’t smiling. Worry was written across his wife’s face.  “Are they really green?”

“Well, mostly.”  Heather took her father’s hand and the three of them found a place to sit on a large boulder.  “All but the faces.  Their noses are long and kind of red, and pointy like their ears, and they curve down.  And they’re real small like little kids, but old and wrinkled like grown-ups.  Why, they’d barely come to here, if they could get that close to me!” She held her hand chest-high.

Hunt mouthed the word over the dark tresses of the little girl:  leprechauns.  Laurel shrugged in wonder.  “Go on, baby, tell us more about them.”

Heather’s features perked up, now that both adults were finally paying attention to the mystery that had held her spellbound for days.  “Well, some carry funny-looking sticks, and they chatter in crazy voices—really fast talking, you know?—but not as fast as, say, squirrels talk to each other.  And they are always looking for something in the woods, maybe something buried, since they mix stuff up and pour it onto the ground and then dig it up again.”

Now Laurel threw Hunt a “you’ve got to be kidding” look.   He stifled a laugh, hugged his daughter close so she wouldn’t spot the grin, and said:  “Do they see you at all, baby girl?”

“I don’t think they do.” She was trying hard to be perfectly accurate.  “They haven’t spotted me yet, I think.  But I do hold real still and don’t move, or they might just disappear.  They’ve looked toward me, directly toward me, but they don’t seem to pay any attention.  So I guess I’m not what scares them off when they disappear.”

“Look, honey, when did you first start seeing these odd things?”

“It must be a week or more, Daddy.  At first there was just the one, but now usually three or four, all looking around for something together.  They move real slowly, searching the trails and the big rocks up on the cliff.  I’m sure they’ve lost something.”

“Okay, Heather, here’s what we’re going to do.  If all three of us head up there together, real quiet, of course, do you think they’ll be there, that we’ll see them, too?”

“Well, then, go wash for dinner.  As soon as we’ve eaten, we’ll all go on up and do some searching on our own.”

To be continued in tomorrow’s blog…so check in again!