Dear Reader, be sure to read the first installment before continuing…

Heather was pleased.  Someone was finally taking her seriously. It didn’t happen often anymore, certainly rarely since she had left her closest friend Robin last spring.  Her mother had insisted  the family needed a break, needed to get away from daily squabbles and competition, a chance to reaffirm their oneness to nature.

So here they were, living deep in the wilderness, and Heather felt lonely on the edge of the big forest.  Only the company of the many wild animals kept her from begging her parents to move back. Living alone had taken on a new excitement when every hare, deer, bobcat or bear could be greeted by name.  And every morning upon arising she looked forward to greeting her new friends, her new wild friends.

Now she left her parents behind and loped down the meadow toward home and dinner, trying to mimic the cougar she had admired from across the meadow that morning. Maybe the little green ones were just fellow forest creatures, as well, ones she could befriend, learn their funny, high-pitched chatter, and never be lonely in the woods again.  But something about them did scare her.  At least, for now.

Laurel and Hunt came along more slowly, hand in hand, deep in conversation.

“I know it’s weird, but what she described sure sounds like the legends of little people with magical powers.  The stories have been around for ages–I’m sure our ancestors told them around the campfire.  You don’t suppose…”

“Laurel, I can’t even guess what Heather thinks she’s seeing, but I’ve hunted these woods forever and sure haven’t run into any thing even slightly odd.  But you know, they say kids are closer to nature, not so attached to reality and the senses.”

“More intuitive, perhaps?  There’s no way we’ve discovered all there is to know about our world, even though we think we understand it.” Her eyes followed Heather’s rambunctious gait, more lively than she’s seen their daughter in months.

“But just in case this is only lonely Heather’s imagination run wild, perhaps we can get one of her old friends up here for the rest of the summer.  Robin, maybe?” He wrapped an arm around his wife’s shoulders and she smiled back at him.  Good idea.

Dinner was a difficult affair at best.  Heather was extremely excited about her parents’ willingness to go look for her new forest dwellers, but furious at her father for having killed the deer.

“Just listen, Heather.  This ‘friend’ of yours was wiping out your mother’s herbs and most of the other vegetarian delights which now make up your meager diet.  And I, for one, think the venison’s delicious.” He stuffed a large bite in his mouth and chewed with gusto.

Heather fumed.  “Well, I won’t eat any of that…that stuff.  I love them all, and I can’t stand seeing you kill them!” Tears glistened in the corner of her eyes.

“Heather, take a closer look at what you see among your ‘forest friends.’ Doesn’t the bobcat eat the rabbit, and what about the cougars and the deer?  Meat-eating is fundamental to nature’s balance.”

“Well, that doesn’t mean I have to act like the meanest creature out there.  Maybe if we set a better example, they’d all quit eating each other, too.”

With that, she rose and stormed out.  Her parents watched the little girl walk resolutely, head held high, up the meadow toward the woods.  She reached the big stone and waited there.

“She’s young yet, and it’s probably just a passing phase.” Laurel’s voice was full of motherly patience and concern.  “Let’s figure out the ‘little green men’ thing first, then we can build up to solving the ‘meat’ thing.  And anyway, they say there are plenty of healthy vegetarians out there.”

Her husband grunted his disapproval past a mouthful of meat, finishing off his slab of venison.  “Now that I’m fortified for the challenge, on to the forest and the mysterious little ones.  It’ll be dark soon.”

Heather led them cautiously up toward the bluff.  The forest was an overpowering mass of greenery, the leaves still damp and the air humid from the late afternoon showers.  Long, rank ferns jutted boldly from deepening shadows.  Here and there berries speckled the underbrush, and Hunt grabbed a handful in passing.  Dessert. The moss-covered trunks of the fir and tamarack gave refuge to chattering squirrels and a jay, which fled at their approach.

It was a wonder to watch the little girl.  She moved as stealthily as an animal, causing hardly a ripple in the lush green undergrowth as she followed the trail up into the rockier granite outcroppings.  Her parents felt clumsy by comparison.

The long, narrow meadow on top of the rise glowed purple in the twilight.  As it opened before them, Heather came to a standstill and help her position like a stalking cat.  She gestured for silence. Hunt scanned the high meadow with his trained eyes, watching for a flicker of movement.  His ears were alert for the betraying snap of a twig or the crunch of leaves underfoot, but they found only silence, broken once by the cry of an eagle in the distance.

Hunt had passed through this clearing often, even before they had settled in the area, and it had never won more than a cursory glance.  But it seemed little Heather had discovered something here that his own practiced eye had missed over the years.  He chuckled to himself.

Heather crouched down slowly.  Was she planning a long wait? Cool evening air swept down off the higher ridges as the light faded. Laurel shivered, but not from cold. Long minutes passed in silent anticipation.

“Where exactly did you see them today?” Hunt tried his best to suppress his smile.  “Show me the spot.”

Heather moved across the meadow, her caution betraying a latent anxiousness.  She stopped just short of a worn path which edged the wall of aspen at the rim of the meadow.  “They were walking along here, searching.” She pointed up the deer trail.

Hunt hated to admit it, but an odd sensation overtook him as he reached the spot, a strange smell which the nose couldn’t readily detect, a subtle vibration sensed more with skin and hair than the eyes.  Impossible to really define, but it set his nerves on edge.  Not fear, but an inexplicable unease.

Laurel spotted it first in the indigo light.  “Oh my, look at this!” Barely visible in the dark mud, the raised edges catching the last glimmer of twilight, lay tiny footprints, severely elongated, each coming to a point with what appeared to be a single toe.

Hunt squatted down to examine one closely, tracing its outline with a finger.  It was less than half the size of his own foot.  “Let’s get back home for now.”  His eyes followed the deer trail as it disappeared into the gloom.  “Come on, we’ll take a closer look in the morning when there’s more light.”

They returned cautiously  across the meadow and into the woods.

Silence reigned all the way through the blackened forest. 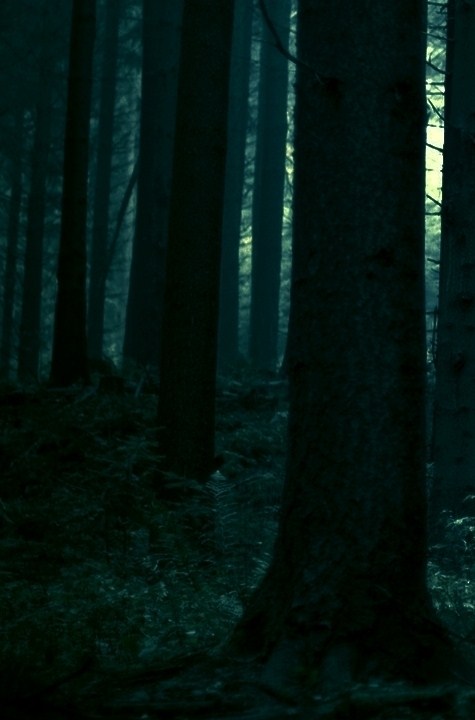 To be concluded tomorrow.