MY CAREER IN THE MILITARY: PART FIVE: No Way to Start the Day 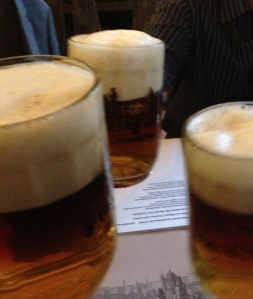 (Dear Reader – You may wish to read parts 1-4  in the Archives to the right before jumping into this story.)

So there I was, having avoided military service in some clammy tent in Vietnam, or—worse still—as a forward observer in the jungle, as had been my expectation. Instead I found myself sitting pretty in pretty Germany, having just wrangled  a position as an “enlisted command interpreter” to an Army general, and well on my way to having my Military Occupational Specialty changed to some administrative MOS designation. I wasn’t picky, I’d take whatever they offered.

So what did I do on my first day on the job?  Why, I spent the day getting soused, of course.

Yeah, that’s pretty much it.

Well, I guess I owe you an explanation, so here’s how it happened:

As those of you who have followed this military memoir know, I was a bit naïve about how the military works. But there was one thing I had learned and learned well, when an officer tells an enlisted man “jump,” you had better jump, or you’ll end up doing laps on your belly in the sawdust pit till your digestive system thinks you’ve switched to an all-cellulose diet.

So who comes knocking on my barracks door, bright and early on my first day of official duty in Germany, but a captain and a lieutenant, the very two who had been instrumental in my rise up the command ladder just twenty-four hours before.

“A group of us are off on a bus tour of breweries,” said the captain, “and we thought your German-speaking talents might be of use. How quickly can you be ready?”

I know it sounds even more naïve, but I was so pleased with my new job and the pleasant camaraderie with junior officers  that I didn’t give a moment’s notice to the fact that—believe it or not—beer and schnapps both contain alcohol. Lots of alcohol. And as a modest drinker at best, my system didn’t register the copious amount I had consumed until I suddenly felt ill. Very, very ill.

Now hereafter the picture gets a bit fuzzy. I remember sitting for an extended period in a men’s room stall being berated by Germans who wanted to use the facility and kept pounding on the door. I remember a helpful albeit equally drunk lieutenant leading me up and down outside the brewery on the icy pavement, trying to sober me up a bit, when all I wanted to do was croak. I remember coming to consciousness sitting at the bar of an officers’ club (where I had no right to be due to my lack of rank), shoving away the beer glass the bartender had just placed before me. And something about seeking a safe hiding place for my wallet once I was back in the barracks, because I remembered hearing earlier from someone that drunken soldiers often had their wallets lifted.

Clammy sweat drenching every inch of my body.

And the certainty that I never again wanted to let such a thing happen to me. I dragged my way to the headquarters building to report for the day’s duties. And was immediately summoned to the office of the Chief of Staff.

“Well, O’Bryon? What the hell happened to you? You were supposed to report to the general twenty-four hours ago.” A certain tone of disapproval worked its way through the haze which enveloped my every thought and the pain which accompanied every movement of my head and body.

“Well, sir, I went on the brewery tour,” I announced with appropriate gravity.

Believe it or not, he hadn’t been aware of any tour. Nor had anyone authorized my participation. But he was savvy enough to call in one of the captains, and it turned out that those fine young officers had decided to have a bit of fun at the new “enlisted interpreter’s” expense.

And luckily the general had been an enlisted man once, as well. So my job was saved. I was sent back to the barracks to sleep it off. And I reported to work the next morning. Sober. And a little less naïve. And later I even became friends with a couple of those young officers.

My wallet was gone, so I had to have my folks wire me cash till next payday. And two months later, when moving from the barracks into a private apartment off-caserne, I did find my missing wallet, hidden in the toe of a shoe. I may have been soused, but sometimes even in a drunken haze a clever plan works.